National and local news sources have been fixated on unemployment rates and other economic indicators over the last few years, and for good reason. The years of recovery that followed the Great Recession of 2008 were turbulent. Minnesota is now in a period of economic expansion, and has been for the last few years. Understanding where continued job growth is projected to occur and what sectors are likely to grow or decline can help MnDOT and its partners maintain a transportation system that keeps Minnesota economically competitive both nationally and globally.

Trends in Minnesota’s economy are highly reflective of demographic, environmental, and technological trends in the state. Changes in these areas impact the types of businesses that are needed to provide the goods and services that are in demand; this has led to significant change in how many people are employed in various economic sectors in Minnesota. Generally speaking, Minnesota’s economy is slowly shifting from agriculture and manufacturing, two highly visible industries, toward service industries such as education and health services and professional and business services.1 Figure 1 shows the gross domestic product of Minnesota’s top economic sectors.2

For many, the recovery from the Great Recession of 2008 was a long and slow process. Minnesota, in comparison to other states, has recovered more quickly than other states or the United States as a whole, and has enjoyed a period of economic expansion during the last few years. Unemployment in Minnesota is now below levels recorded before the recession in 2007, though more people are involuntarily employed part time now than before the recession.3 Figure 2 shows the percentage of Minnesota’s workforce that is unemployed and involuntarily working part time.

The sectors of the economy projected to have the largest job growth gains are construction and health care and social assistance (25.0 and 22.9 percent respectively).4 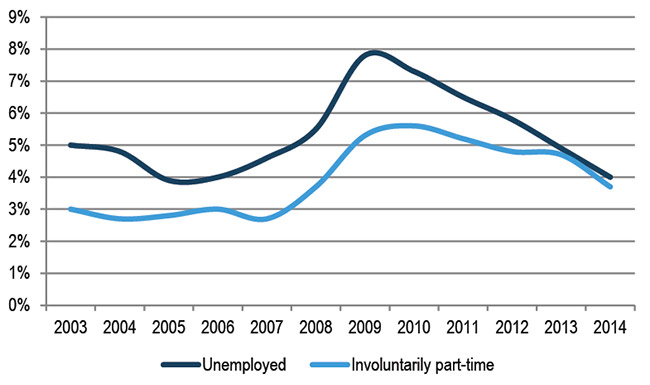