The four federal grant sources available to Greater Minnesota transit providers and are described below:


Urbanized Area Formula Program (5307) is available for urbanized areas, defined as places with populations greater than 50,000 but less than 200,000, excluding the Metropolitan Council in the Twin Cities. Funding is available for transit capital, planning and operations activities. Minnesota has eight urbanized areas eligible to receive this grant. The seven cities in Greater Minnesota are Fargo-Moorhead, Grand Forks-East Grand Forks, La Crosse-La Crescent, Mankato[1], Rochester, Duluth/Superior and St. Cloud. These areas receive 5307 grant funds directly from the FTA. Urbanized transit systems in Greater Minnesota received $8,683,755 in 5307 funds for FFY 2015. For FFY 2016 Minnesota received $8,667,839 in 5307 grant funding for all seven urbanized areas throughout the state. [2]

Enhanced Mobility of Seniors and Individuals with Disabilities (5310) provide funding for capital and operating assistance to organizations that serve elderly and/or persons with disabilities. MnDOT distributes 5310 funds to selected awardees. Awardees may include tribal governments, state and local governments, private nonprofit organizations, public transportation operators, and private operators of public transportation services. For FFY 2016 MnDOT administered 5310 statewide for the following:

States and registered tribes are the direct recipients of these grants from the FTA. States distribute funds to sub-recipients that may include local governmental authority, a nonprofit organization or an operator of public transportation or intercity bus service. Boise Forte and Fond du Lac Tribes are direct recipients of FTA dollars. MnDOT supports two tribal systems, White Earth and Red Lake, from MnDOT’s 5311 funds in addition to 5311(c). Since MnDOT is a direct recipient of 5311 grant funding, it selects sub-recipients through an application process before entering into a contract with the selected grant awardees.


Bus and Bus Facilities Program (5339) provides funding to assist in the procurement of vehicles or construction of facilities. MnDOT is responsible for distributing these funds to Greater Minnesota transit providers. The funds can only be used for capital investments (replacing, rehabilitating, and purchasing buses and bus-related equipment, and constructing bus-related facilities). For FFY 2016, Minnesota received a total of $635,929 for Greater Minnesota urban areas and $1.75 million for rural areas.

The Minnesota Legislature appropriates transit funding from the general fund on a biennial basis. The legislature also statutorily sets the percentage of Motor Vehicle Sales Tax revenue dedicated to public transit at 40 percent:

MnDOT annually distributes state funds to Greater Minnesota transit through the Public Transit Participation Program. These funds are used for operating, capital and planning activities. Any of the following organizations—or combination of the following— are eligible to receive state funding:


In some communities local funds are provided to “close the gap” where insufficient fare and contract revenues are collected. Figure 9‑3 summarizes the local share of operating costs over a five-year period.

Figure 9‑4 shows the annual operating costs for Greater Minnesota transit systems by peer group. Overall transit operating costs in Greater Minnesota increased by 25 percent (almost $15 million) during the five-year period. During this time, hours of service and ridership increased by 9 percent, while inflation accounted for much of the remainder. Urbanized and ADA-complementary paratransit systems experienced the most significant increase in operating costs at 32 percent ($8 million) and 18 percent ($0.8 million) respectively. The significant decrease in small urban costs and increase in rural and urbanized costs is due to the reclassification of Mankato in 2013 as well as some small urban systems merging with rural systems.

Additional service must be added by transit systems that are not providing a span of service that meets or exceeds the baseline. Those additional hours are estimated at $90 per revenue hour (per vehicle in service) for urban providers, and $55 for small urban and rural providers. These costs are fully allocated, meaning that administrative costs for extended dispatching, customer service, maintenance, etc. are included. These costs are calculated as baseline service improvements and are shown in Figure 9‑5.

MnDOT’s current annual operating grant contract budget is $77.6 million (FY 2015) (Figure 9‑1). Ensuring that transit systems increase their service to meet the baseline service span means an additional 277,000 annual service hours at an annual operating cost (based on FY 2016 $) of $17.8 million. This represents a 23% increase in operating costs over existing expenditures.

If all service improvements and expansions listed in Figure 9‑5, Figure 9‑6 and Figure 9‑7 were implemented, the additional 508,967 service hours would result in a 51 percent increase in Greater Minnesota annual transit operating costs (additional $39.4 million). While the current overall local share requirement is approximately $13.4 million, the expanded services would increase the local share requirement by approximately $6.8 million (Figure 9‑8).

In many communities, it is assumed that additional service will also require capital (bus) purchases. These costs are shown in Figure 9‑9. A total of 246 additional buses are projected to be needed to meet service improvements. These will cost approximately $45.1 million (local share is $9 million). Based on MnDOT’s 10-Year Capital Plan, annual capital expenses increase from $12.1 million in 2016 to $26.8 million in 2025, with a cumulative total increase of $229.6 million. The expansion vehicle costs are not included in the 10-Year Capital Plan.

Note that the 246 vehicles is the total number to implement the full service improvements. Service will be added incrementally and capital will be purchased as needed over the next several years.


Cost of Meeting 100% of Transit Demand


Meeting 100% of transit demand will require capital investments. Figure 9‑12 shows the replacement costs for the existing fleet during each five-year period from 2016-2030 which does not include the vehicles needed for the service expansion. Figure 9‑13 shows the additional number of vehicles needed to add service to meet 100 percent of demand per five-year period. A standard of one vehicle for every 3,000 hours in urban areas and one vehicle per 2,000 hours for rural service was used in this calculation. The local capital share for both urban and rural systems is 20 percent.

To guide potential investment strategies for future services and to better understand the size of the investment gap between current transit services and projected demand, MnDOT developed a service plan to meet future transit demand in Greater Minnesota. The primary inputs for the cost model are the future service demand estimates (service hours) developed as part of the service plan and current operating expenses per service hour. To develop the cost estimates, an average expense per hour rate for transit systems was applied to the future service plan and adjusted for inflation, assuming costs will increase at 3 percent per year.

The number of hours listed in Figure 9‑14 depicts the number of hours to implement all service including expansion. The hours are incrementally ramped up each year by 57,000. Of the total 57,000 additional hours each year, 28,500 will be added to urban systems and 28,500 to small urban and rural transit systems combined. The annual operating cost is based on the 2016 average transit system cost of $65 per service hour, indexed with a 3 percent annual increase. The 57,000 additional hours will provide service needed to increase ridership to meet the 90 percent of demand target by 2025.

Figure 9-14. Total Operating Cost for All Service, Including Service Improvements

Figure 9‑15 shows that transit revenue sources will generally remain stable until 2025 with the exception of the Greater Minnesota Transit Account previous year carry forward amount, which will decline starting in 2024. The GMTA previous year carry forward amount is important. It must always exceed the amount of Motor Vehicle Leased Sales Tax that will be received in a given fiscal year because the Motor Vehicle Leased Sales Tax MVLST is not deposited until the last day of fiscal year. The GMTA can never go into negative numbers. Thus, to achieve this increase in service, more funding must be available for FY 2021 and beyond to keep the GMTA above zero. 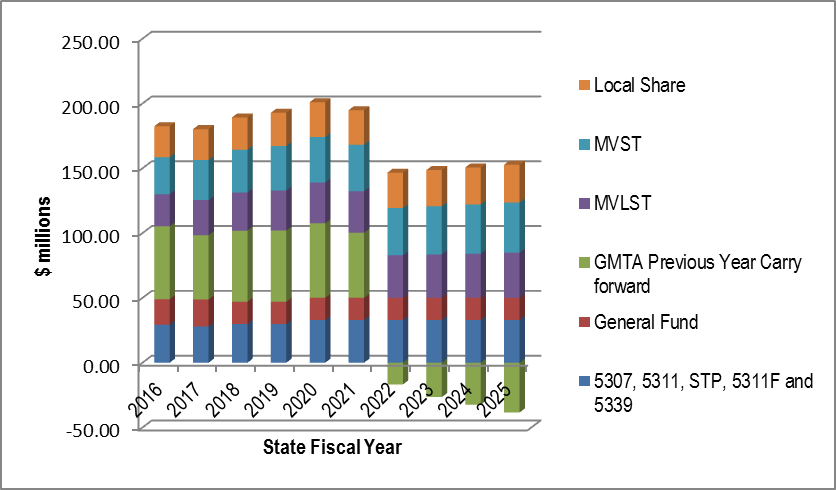 MnDOT’s funding forecast shows that with already-planned expansions, expenses will exceed revenues in 2021(Figure 9‑16). By 2021, a positive carry over balance in the GMTA will be used up and additional funding will be needed from that year forward to continue to meet 90 percent of the transit demand. This is projecting a total gap for this period of $114.1 million. Additional funding would need to be identified prior to 2021. 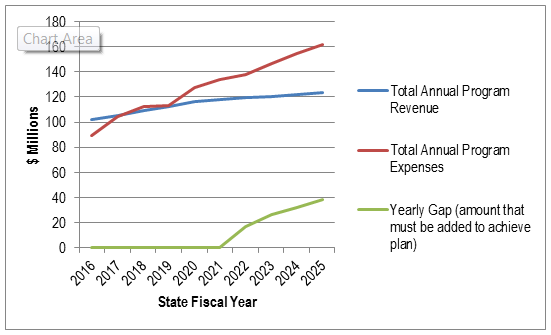 In addition, to developing strategies for how to invest in Greater Minnesota transit, this Plan also establishes investment categories that correspond to changing funding scenarios. MnDOT’s approach to increased or decreased funding scenarios is illustrated in Figure 9-17. MnDOT’s first priority for Greater Minnesota transit is to fund each system at a level sufficient to continue the current level of service and add additional hours to reach the baseline span of service. 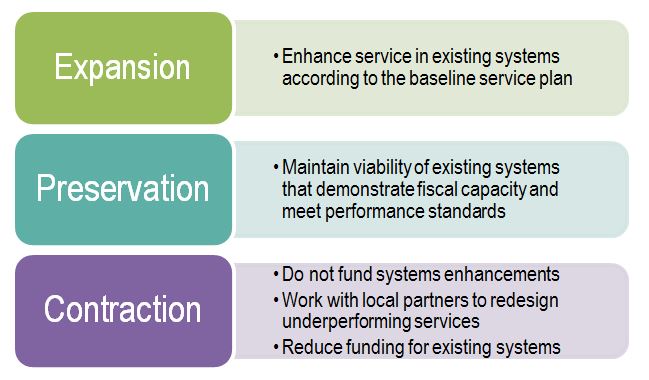 1. Mankato’s population surpassed 50,000 at the 2010 Census and the city began receiving these funds in FY 13.
2. MnDOT. 2015 Transit Report: A Guide to Minnesota’s Public Transit Systems. February 2016.
3. Based on average hourly operating costs of $90 for urban service and $55 for rural service.
4. Additional hours of service needed for urban improvements were identified by the urban transit providers as part of the planning process
5. The operating cost for cities 2,500 to 50,000 were combined in this chart, the description lists the two different service spans for cities 2,500-6,999 and 7,000 to 49,999.
6. Northstar Link-type services to urban areas over 50,000 population ($150/hr.)
7. 40 counties x 8 hrs./day x 50 wks. Assumes half of counties already have mobility routes.
8. A feasibility study is needed to define the additional annual hours.
9. “NA” values do not have standard costs per annual revenue hour or operating cost.
10. Vehicle costs per MnDOT: Urban service - $47000 (Class 700 Diesel); Rural and Small Urban - $76,000 (Class 400 Diesel) Annual Cost index of 3% annual.

Related Sections in the Plan