For each Greater Minnesota Transit Investment Plan, Minn. Stat. 174.24 requires MnDOT to make an assessment of ridership, total transit services needs in Greater Minnesota, and a plan to meet those needs.

This plan fulfills all statutory requirements throughout the following chapters. Some of the terminology was changed from the statute to language that is easier to understand. The new language does not change the original meaning of the statute but clarifies the terminology for the readers of this document.

In addition, the state statute directs MnDOT to identify the passenger levels, levels of service and costs necessary to address the following targets:

After identifying the demand for public transit, MnDOT developed a service plan that addresses the needs of riders and potential riders such as reliability, evening service and weekend service. The plan also calculated the ridership potential generated from the service improvements and how the service plan meets the demand for public transit as required by the state statue.

The first component in the Mobility Gap formula is to use the daily household trip rate by vehicle ownership. This trip rate was developed from data in the 2009 National Household Travel Survey for the West North Central Division, which includes North Dakota, South Dakota, Nebraska, Kansas, Missouri, Iowa and Minnesota. As shown in Figure 6-1, as the number of vehicles per household increases, the trip rate also increases. Zero vehicle households make 2.4 trips per day while households with one vehicle make 4.5 trips per day. The difference between the trip rates represents the mobility gap for households owning no vehicle.

The Mobility Gap formula multiplies the trip rate difference by the number of households without vehicles in the given area. Multiplying this value by 300 days provides the annual number of trips not taken due to a lack of vehicle. The value 300 (determined for use in the formula by Transit Cooperative Research Program (TCRP) reflects that trip need is likely reduced on the weekends, but annual need is not only associated with weekdays.

Figure 6‑4 shows the estimates of projected travel need for Greater Minnesota. It should be noted that these estimates greatly exceed actual travel demand observed by local transit systems. Only a portion of the overall transit need can be met by public transit services. The Mobility Gap formula provides a relative estimate of mobility limitations, measuring only one factor of influence—lack of access to a personal vehicle.

Public transit cannot meet all of the transportation needs in Greater Minnesota. In transit terms, “demand” is the number of passenger trips to meet the need. The term “ridership” refers to the actual trips made on public transit. A Ridership Estimation Model, Figure 6‑6 was used to estimate the demand for public transit and the ridership by incorporating trip rates for transit-dependent population. Because the model does not account for local conditions, it should not be used to estimate transit demand at a county or local level. The model is also not intended to serve as a planning tool for designing future transit services that could influence travel choices. A description of the model used to calculate these numbers is available in the Appendix.

The 2014 statewide transit model is based on a recalibration of the national methodology for assessing transit ridership as released by the Transit Cooperative Research Program. The TCRP national model was developed to guide decisions on how to distribute federal transit funding at the state level. This model assesses transit need in rural areas on the basis of demographic features that describe the level of transit dependency. These features include populations of seniors (aged 60 years and above), people with disabilities, low-income residents and residents in households without a motor vehicle. The equation for estimating transit demand is as follows:

In Minnesota, the TCRP methodology underestimates transit demand throughout the state and particularly in counties with urban MPOs or college campuses. For this reason, an alternative methodology was sought to more accurately predict actual transit ridership in Minnesota. This 2014 methodology recalibrates the TCRP model and incorporates binary (0/1) variables for counties with urban MPOs as well as college campuses. The updated equation is as follows:


The Minnesota-specific hybrid model combining elements of the TCRP model plus integration of higher-density areas resulted in estimates for 2014 ridership that were much closer to actual numbers than the TCRP model alone. Using the 2014 Statewide Transit Demand Model, total statewide ridership demand was estimated at 13.3 million trips in 2014, 18.9 million in 2025 and 20.7 million in 2035 for all counties in Greater Minnesota (Figure 6‑5). 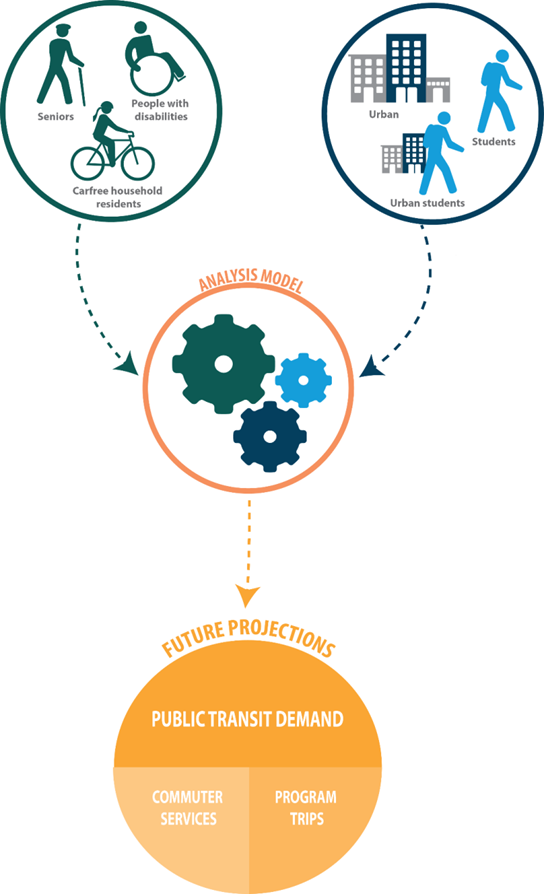 Service Plan to Meet the Demand for Public Transit

The goal of the service plan is to translate the demand into policy and action. Based on extensive public outreach, people take transit because it:

The service plan detailed in the following sections of the plan addresses these components.

After calculating the demand for public transit, MnDOT developed a plan for how to meet the demand and the level of service needed. The legislative target of meeting 90 percent of demand would place the ridership goal at 17 million annual trips by 2025. With a current annual ridership of 12.15 million, this indicates that ridership should grow by 4.85 million trips annually by 2025. To meet the demand, MnDOT developed a service plan that establishes a baseline span of service for communities based on their population. This concept “right sizes” the level of transit service for each community. Small urban systems are broken into two population groups because the density, land use, population and other attributes of cities less than 7,000 are much different from cities of more than population of 7,000.

Figure 6-7 below outlines baseline span of service for both weekday and weekend service. At this time, the majority of cities and communities in Greater Minnesota have service that operates for shorter service spans than the baseline. Existing service spans for each transit system are shown in the Appendix.

*These are the baseline spans of service for county seat towns, but serve as guidelines only for service span in non-county seat communities.

As calculated in Figure 6-8, Figure 6-9 and Figure 6-10, the total 508,967 additional hours of service could result in a low estimate of 3.54 million rides by 2025 and 6.27 million rides by 2025 in the high estimate. Based on this calculation, implementing the baseline span of service should grow ridership to meet the legislative target of meeting 90 percent of demand by 2025.

Note: These ridership numbers do not account for service provided by tribal public transit.

Agencies across the state provide service at different levels depending on their resources, service population and other factors. To meet the baseline set in Figure 6-7, agencies may be required to add longer service span hours to their current offering. Figure 6-11 and Figure 6-12 highlight in orange the number of additional hours needed to reach the service baselines. The overall trend is that cities, which lack service, need to increase span for both weekday and weekend services. Urbanized systems generally have the largest service gaps among providers in Greater Minnesota.

Figure 6-13 shows that the total projected service hour gap for weekdays is 200,453. If these additional hours were provided, transit agencies would meet their baseline standards assuming they continue to operate the same number of vehicles they currently operate for the extended service span. Additionally, 45,172 service hours are projected for Saturday service and 31,745 service hours to meet the Sunday service span baseline.

Although transit systems will be encouraged to meet the baseline service standards, each system must contribute the required local match to state funding and is subject to the performance standards described in Chapter 8. Transit is a public service and can be implemented in each county based on the need. For example, a small bedroom community may have no desire or need for public transportation. Instead, funds can be directed to other communities with transit service.

In summary, the baseline span of service is estimated to meet 90 percent of transit need by 2025. The goals and strategies identified in chapter 6 provide the link between the needs of riders, preferences of non-riders and the investments to drive transit over the next 20 years.

The Service Plan is projected to meet 90 percent of the identified public transit demand. There are three elements involved with reaching the remaining 10 percent of demand. First, the strategies identified in the next chapter complement the Service Plan. For example, coordinating with Transportation Network Companies and improving links with other transportation modes will build ridership towards meeting the demand. Second, transit can work to eliminate the gaps in service by increasing frequency and coverage and adding more evening hours in rural areas. Finally, developing transit routes for traditional-time commuters and regional travelers will meet the remaining demand. The span of service makes significant strides in providing access to transportation for communities; however, the demands of some commuters may not be met. This remains an opportunity for transit in the near future.

1. 2014 Greater Minnesota Transit Indicators” 2015 Annual Transit Report: A Guide to Minnesota’s Public Transit Systems
2. No information is available at this time. A feasibility study is needed for more information
3. Coverage is defined as a five-mile buffer around the community boundaries and will be provided using the existing hours. More information is needed before hours and ridership can be calculated.
4. More study is needed before ridership estimates can be calculated

Related Sections in the Plan