Chapter 4 – Markets for Transit and Trends in Greater Minnesota

The types of public transportation that can meet demand vary by community context. In dense urban areas, a larger variety of services exists due to higher population densities and land use mixes. In rural areas, driving may be the predominant travel option due to long distances between destinations, and basic transit service might serve those who have no other transportation option.

Population and employment densities are important factors because the clustering of people and jobs helps determine where transit routes should run. Most transit systems have two types of riders: 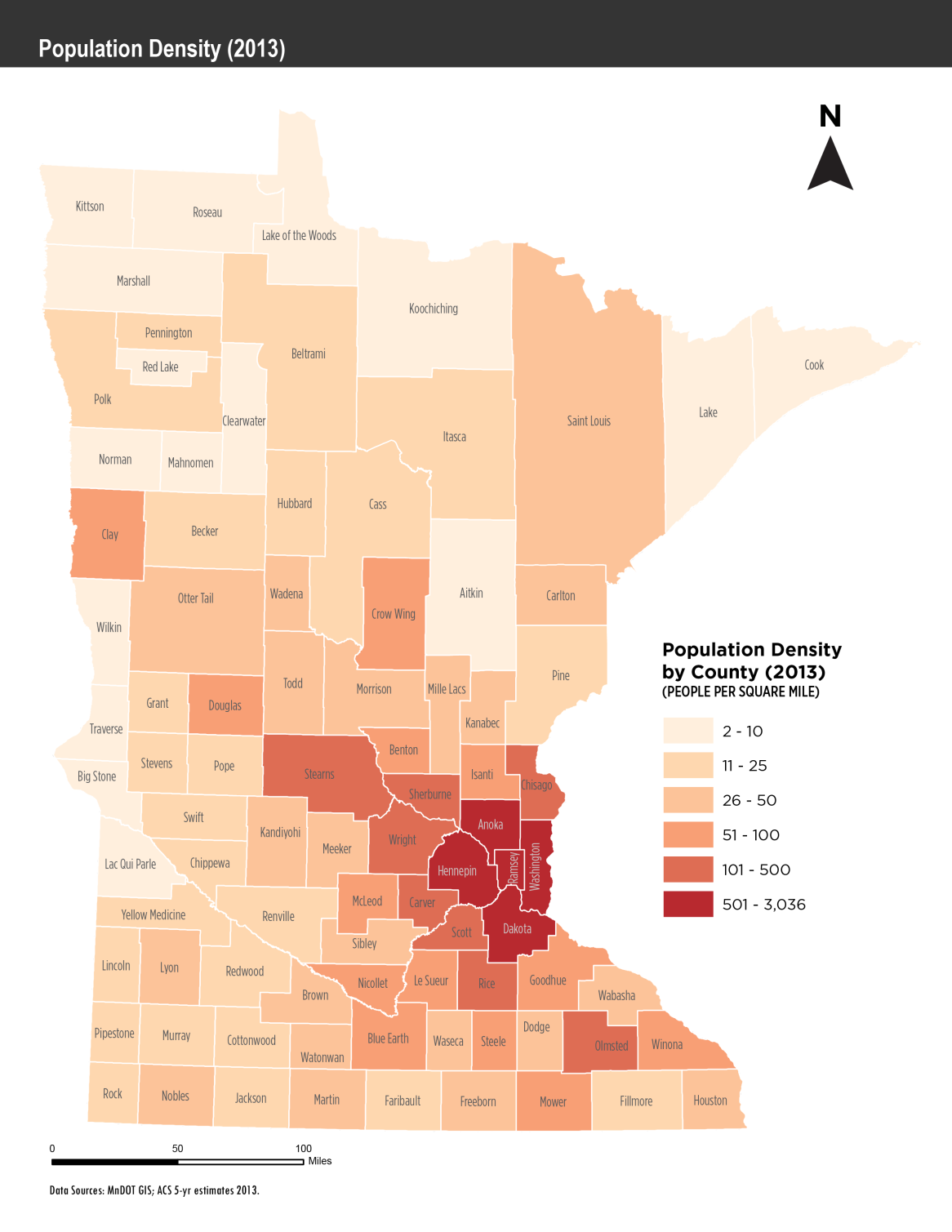 Figure 4-2 displays proportionally-sized symbols representing employment density by Census Block. Many of the state’s largest employers are located in the Twin Cities region. Considerable nodes of employment density also exist around Greater Minnesota’s largest cities such as Rochester, Duluth, St. Cloud and Mankato. Despite the low density of jobs throughout much of the state (see Figure 4-3), the wide distribution of employment sites shown in Figure 4-2 highlights the importance of countywide and regional commuter options in Greater Minnesota. 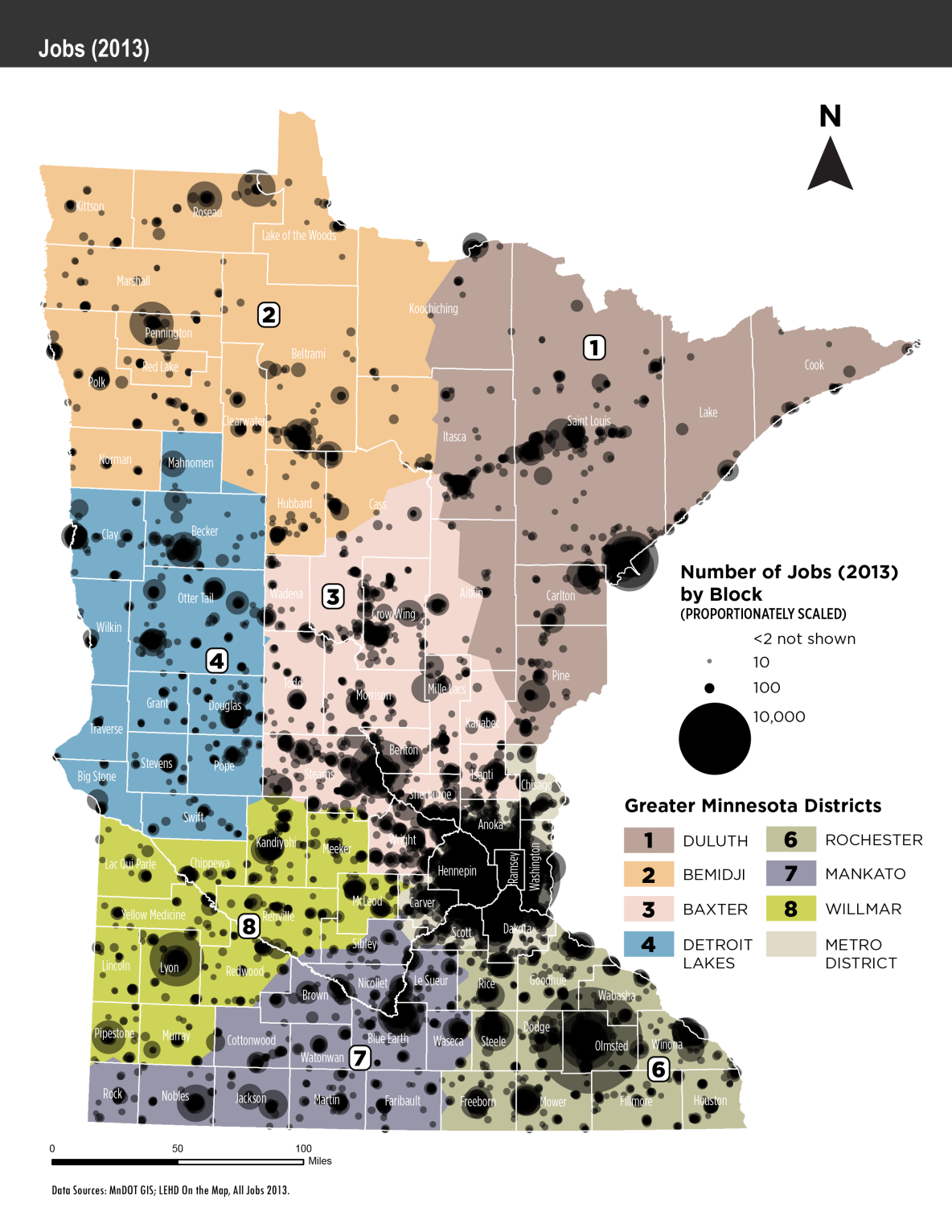 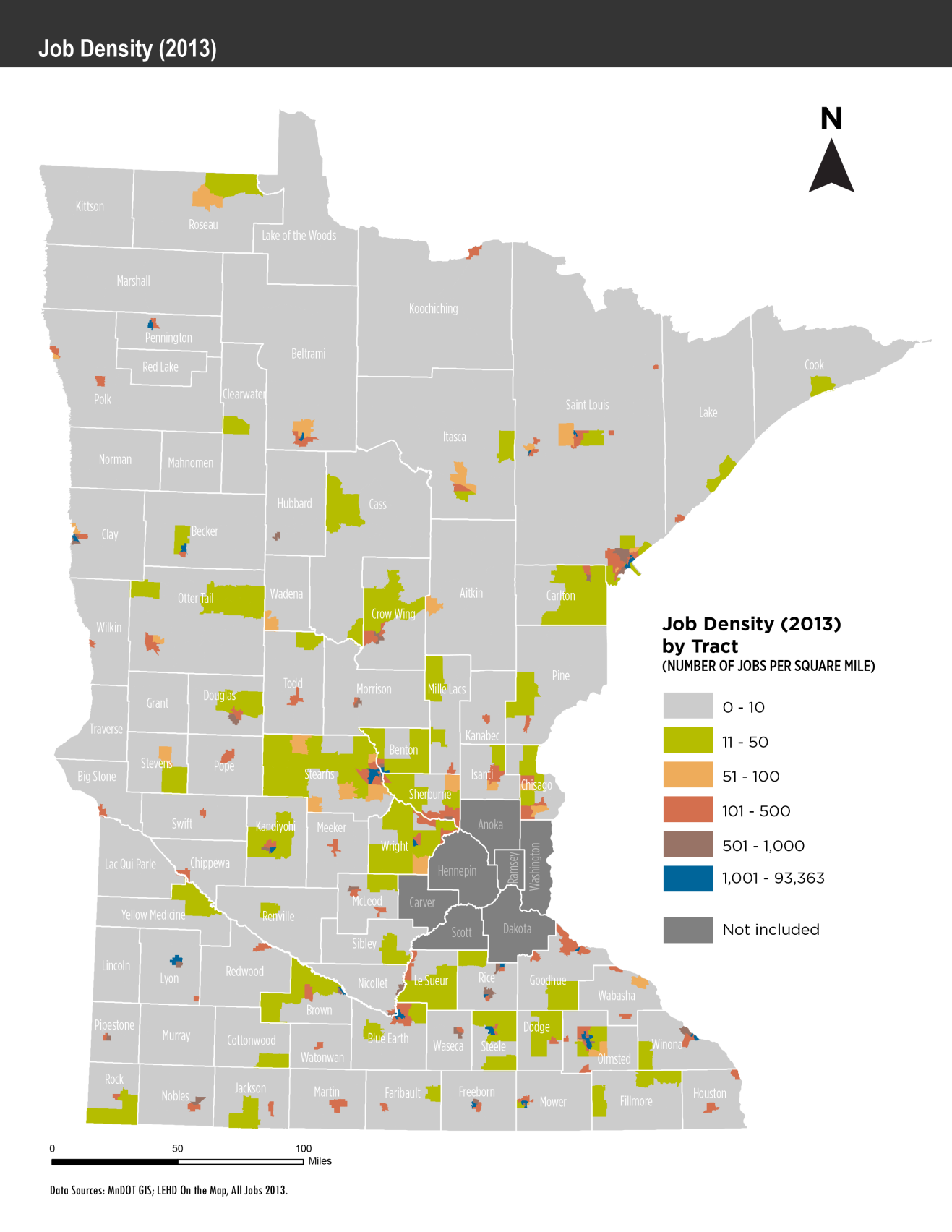 Transportation is often a primary barrier cited by individuals as to why they are unable to access employment, medical services and educational opportunities. For this reason, considering environmental justice is a vital component of a broader evaluation of statewide transportation policies and investment priorities. Presidential Executive Order 12898, issued in 1994, directed each federal agency to “make achieving environmental justice part of its mission by identifying and addressing, as appropriate, disproportionately high and adverse human health or environmental effects of its programs, policies and activities on minority and low-income populations”. The order builds on Title VI of the Civil Rights Act of 1964, which prohibits discrimination on the basis of race, color, or national origin. 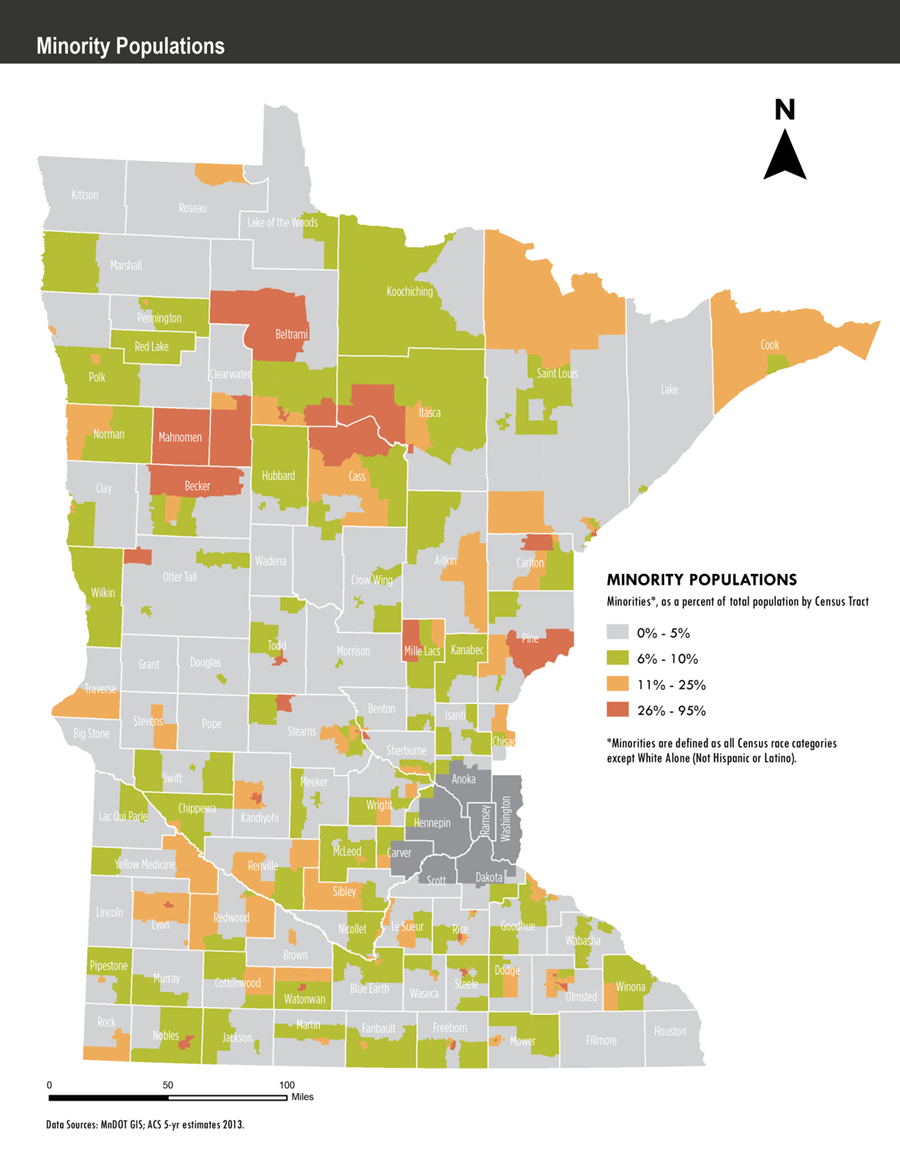 MnDOT developed a transit dependency index to highlight areas with concentrations of populations that may use transit. Factors considered in this analysis include densities of the following: population, employment, youth (under 18), older adults (age 65+), households without a vehicle, persons with a disability, limited English ability and low-income households. Further explanation of the methodology for this analysis is provided in Technical Memo: Trends and Opportunities. 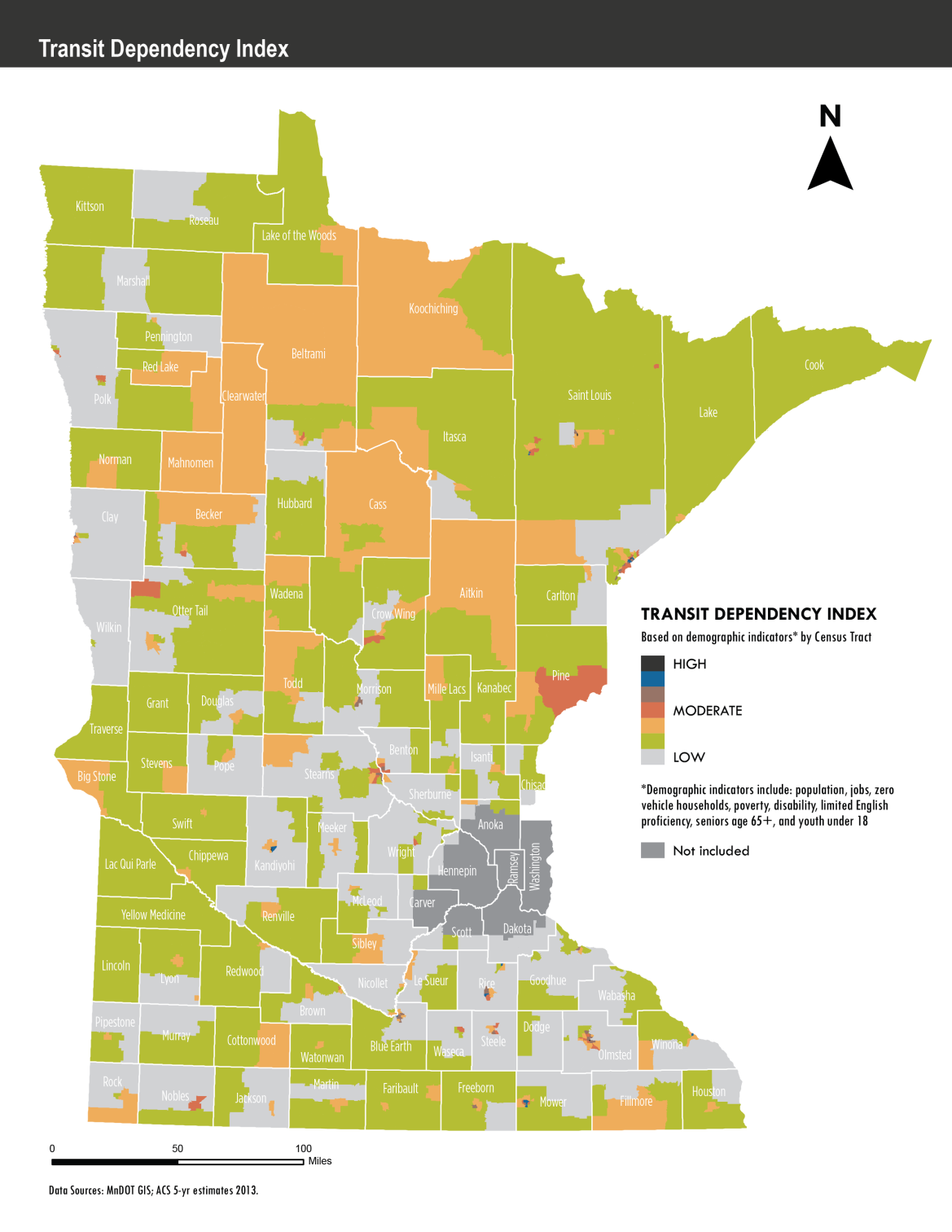 Transit service must meet the times and places where people need to travel. Transit systems must evolve as demographics and lifestyles change. How people access information, the makeup of a typical household, shifting job markets, and the size of generational groups all affect the need for and design of public transportation.

Demographics – the quantifiable characteristics of a population – by their very nature are constantly changing in society. Demographic trends affect the need for public services such as transit. By comparing rates of change in Greater Minnesota to the country overall, unique transportation needs begin to emerge.

Many aspects of Greater Minnesota’s economy affect the need and demand for transit, such as income levels, employment sectors and changes in technology. An increase in poverty potentially increases the number of persons that have difficulty affording a personal vehicle and are in need of access to jobs and to other services. Rates of employment impact the number of frequent transit customers. Since most people travel to work five days per week, a transit system that meets employment needs can capture a high number of frequent riders. The sectors of employment matter in terms of when people need to travel. Second and third shifts, common to Minnesota’s manufacturing sectors, require late night and early morning travel.

The development of a sharing economy that uses technology to organize trips and potentially even drive vehicles changes transportation behavior. The following summary statements highlight these trends.

Public health should be considered for future transit investments. Given the trends in older adults, transportation investments in walking, bicycling, and transit infrastructure and programs can increase physical activity and support access to public transit. A proactive health approach can also reduce the chance of older adults becoming mobility limited. The link between transportation and public health has become prominent through a variety of factors such as:

The markets and trends in Greater Minnesota described above help shape the transit investment strategies to provide services that address these trends and meet the needs of customers.

A full summary of factors contributing to changes in Greater Minnesota is available in Technical Memo: Trends and Opportunities