MnDOT distributed surveys to transit providers operating across Greater Minnesota. The surveys were administered on board transit vehicles to users of more than 40 systems across the state from rural dial-a-ride services to large fixed-route systems in urbanized cities.. Riders responded to questions related to transit use, including mode of access, frequency of use, trip purpose and desired improvements. Surveys were distributed during one calendar week, with most systems conducting their surveys during the week of Nov. 2, 2015. Participants were assisted in a variety of ways including: bus drivers helping to fill out forms for those requiring help writing, working with caretakers to facilitate completion in group homes, and sending forms home with children to receive help from a parent or guardian. In total 5,297 valid surveys were collected: 5,258 in English, 25 in Spanish, 11 in Somali, and 3 in Hmong. To assess the results in the context of the plan, survey responses were grouped into the three population designations used to allocate transit funding (see Figure 5-2).

The findings of the on-board survey provide valuable insights about the current transit users in Greater Minnesota. The results point to differences in the demographic and behaviors of riders among rural, small urban and urbanized systems. However, many ideas and views about existing transit service in Greater Minnesota are similar among riders in all communities.

Overall, the survey results reveal that the majority of transit users in Greater Minnesota are female, white and low-income. More than 75 percent of riders fall within the category of “commuter age” (18–64) and more than half do not possess a driver’s license. This can help transit agencies target marketing and services toward these users. A significant number of riders (about 25 percent) have been riding for less than one year, showing that transit may be appealing to an increasingly broad audience in Greater Minnesota.

While many characteristics are similar for all service types, there is a difference among rural, small urban and urbanized riders. Rural riders are more likely to be elderly, without a driver’s license, disabled, and dependent on transit for trips other than work or school. Rural riders are less likely to ride transit on a daily basis compared to riders in small urban or urbanized communities.

In terms of attitudes and opinions, transit operators across Greater Minnesota earned high levels of satisfaction from riders in all communities. As a whole, riders expressed a desire for longer service hours, improved reliability and weekend service. In regards to how information is distributed, older riders preferred traditional sources of media such as flyers/newsletters and newspapers. Younger riders request more information through websites, social media and email.

The online survey included two components: (1) a needs assessment asking about travel patterns and why transit is or is not a good option, and (2) a game-like component that asked people to prioritize transit service improvements based on cost and potential community benefits. A planning game—titled “Design Your Own Transit System”—used a game interface to identify service priorities by asking people to select transit service improvement strategies from a variety of choices. Strategies were grouped into four major categories:

Each strategy has a cost and an explanation how it would contribute to the community:

Respondents were given a maximum spending budget. This required respondents to prioritize improvements based on community benefits, cost and personal preference. Figure 5-3 shows a screenshot of one of the strategy tables from the survey. 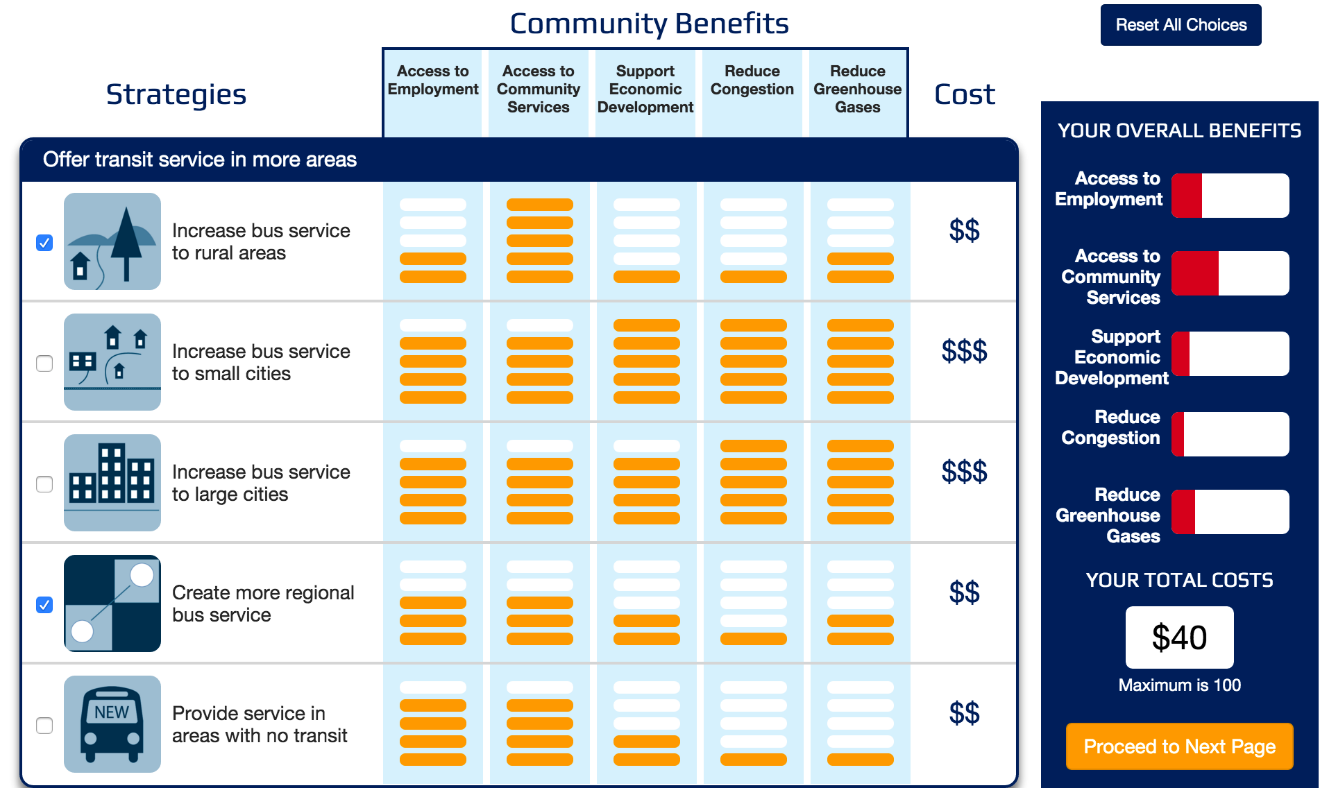 To reach out to populations typically under-represented in community engagement, the survey was translated into Somali, Hmong and Spanish, as well as into an ADA-compatible format. One response was received for the non-English surveys and seven responses were received for the ADA-compatible survey. MnDOT promoted the survey via social media and purchased additional advertising on Facebook. A total of 341 responses were collected for this exercise.

Summarized below are the key findings and themes from the online community survey.

An interactive online mapping tool was developed to better understand travel patterns of current transit users and non-transit users. Information collected through this tool can help quantify the need for public transportation within and across communities. Analyzing destinations and travel patterns helps transit agencies and communities identify where additional or enhanced transit service is desired and where there is a need for further study and outreach on existing service.

MnDOT created an interactive online mapping project using a Wikimapping platform to gather transit user and non-transit user existing and desired destinations (see Figure 5-4). Participants tagged their usual destinations on a Google map and also provided the destination type such as “work”. Each user’s data was tied to a unique identifier, allowing for origin-destination analysis and for users to revisit and update the site multiple times without needing to create a new account. Participants were asked a series of questions, including their current level of transit usage, how frequently they travel and the primary purpose for traveling to each destination. There was no limit to the number of destinations each user could contribute.

The Wikimapping and destination survey tool were available from mid-December 2015 to the end of February 2016. Both were accessible through the “Get Involved” page of the project website and were shared in several email blasts to various stakeholders. Links to the surveys were posted on MnDOT social media pages weekly throughout the open survey period.

MnDOT placed a high priority on connecting with and receiving input from a diverse set of Minnesota residents, including seniors, low-income populations, persons with housing instability, individuals with disabilities, veterans and New Americans. Collectively, outreach to these “hard to reach” population groups was conducted with paper surveys (since internet access is often limited for certain population groups), in person presentations and stakeholder discussions.

MnDOT developed a paper survey with pre-paid postage to provide an alternative opportunity to participate in the GMTIP update for populations with limited internet access and/or computer skills. Several human service organizations across Greater Minnesota were contacted directly to assist in distributing the paper survey. These project partners were asked to give the surveys to clients during appointments, at meetings and at each organization’s front desk. Surveys were shared at community meetings and tribal council briefings attended by MnDOT staff during the plan update. Project partner organizations included:

MnDOT also developed an online version of the survey as another way to collect information, particularly with college students. The survey link was shared with the organizations and through email, Facebook and other social media outlets.

A total of 158 completed paper and 241 online surveys were received. Key findings and themes from the survey aimed at collecting input from hard to reach populations are summarized below.

MnDOT’s Office of Transit worked with multiple tribal nations throughout the planning process. Staff received input on the plan from tribal leaders through guided discussions. Staff also met with and worked with three tribes in Greater Minnesota. During these events, staff used a participatory mapping exercise to understand the regional travel demand of tribal members in addition to distributing the ‘hard to reach’ paper survey.

Understanding the amenities and types of service desired by transit customers is essential to help determine how well service meets needs and where gaps lie. Surveys conducted with riders and non-riders reveal customer expectations that influence whether a person will get on a bus.

In summary, the lessons learned through the public outreach effort, such as the need for longer service hours and improved frequency, are directly tied to the development of the Service Plan that will address customer needs and increase ridership. In addition, rider and non-rider expectations and needs are addressed in the strategic direction and strategy prioritization.